On the scale of Context-driven…

“Isn’t everyone context-driven to some extend? And I mean that on a sliding scale. People who always use the same method and implements this method slightly different every time are maybe 2% driven context (I have combined context-driven and context-aware, sorry for simplification). The Jedi tester using dozens of test methods that he blends to a unique test approach to apply in a specific situation is perhaps 98% context-driven.” 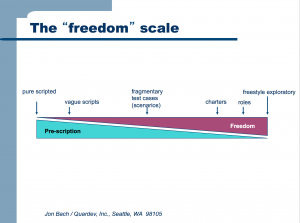 Jon Bach presented a “freedom” scale in his presentation Telling Your Exploratory Story at Agile 2010 Conference. Jon contrasts scripted testing and exploratory testing by plotting them in the freedom scale above.

I am not totally happy with this model yet, but can’t put my finger on it how to improve it. There is more to being context-driven as only applying methods and techniques. I also ask myself what is the added value of such a scale? I think it helps testers understand the differences between context-oblivious, context-aware and context-driven better. It might also make it easier to bridge the gap between the extremes or even advocate that everybody is or can be context-driven in some extend?

What do you think?