Must read: A Context-Driven Approach to Automation in Testing

Test Automation is a hot item in our industry. Many people talk about it and much has been written on this topic. Sadly there is still a lot of misconception about test automation. Also, some people say context-driven testing is anti test automation. I think that is not true. Context-driven testers use different names for it and they are more careful when they speak about automation and tooling to aid their testing. Also, context-driven testers have been fighting the myths that testing can be automated for years. In 2009 Michael Bolton wrote his famous blog post “Testing vs. checking“. Later flowed up by “Testing and checking refined” and “Exploratory testing 3.0“. These tremendous important blog post learn us about how context-driven testers define testing and that testing is a sapient process. A process that relies on skilled humans. Recently Michael Bolton and James Bach have published a white paper to share their view on automation in testing. A vision of test automation that puts the tester at the center of testing. This is a must read for everyone involved in software development.

The follow text is taken from the “A Context-Driven Approach to Automation in Testing” white paper written by James Bach and Michael Bolton.

We can summarize the dominant view of test automation as “automate testing by automating the user.” We are not claiming that people literally say this, merely that they try to do it. We see at least three big problems here that trivialize testing: 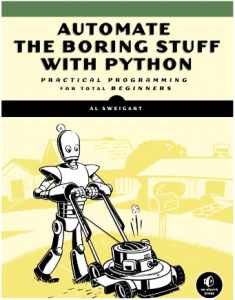 Automation comes with a tasty and digestible story: replace messy, complex humanity with reliable, fast, efficient robots! Consider the robot picture. It perfectly summarizes the impressive vision: “Automate the Boring Stuff.” Okay. What does the picture show us?

It shows us a machine that is intended to function as a human. The robot is constructed as a humanoid. It is using a tool normally operated by humans, in exactly the way that humans would operate it, rather than through an interface more suited to robots. There is no depiction of the process of programming the robot or controlling it, or correcting it when it errs. There are no broken down robots in the background. The human role in this scene is not depicted. No human appears even in the background. The message is: robots replace humans in uninteresting tasks without changing the nature of the process, and without any trace of human presence, guidance, or purpose. Is that what automation is? Is that how it works? No!

The problem is, in our travels all over the industry, we see clients thinking about real testing, real automation, and real people in just this cartoonish way. The trouble that comes from that is serious…

Read more in the fabulous white paper “A Context-Driven Approach to Automation in Testing” by James Bach and Michael Bolton.