Why I am context-driven! 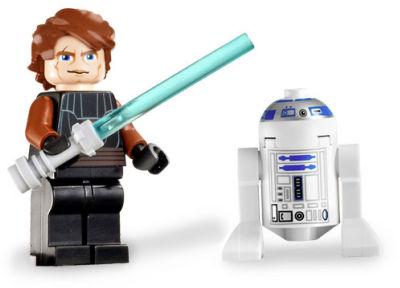 “Because testing (and any engineering activity) is a solution to a very difficult problem, it must be tailored to the context of the project, and therefore testing is a human activity that requires a great deal of skill to do well. That’s why we must study it seriously. We must practice our craft. Context-driven testers strive to become the Jedi knights of testing”. James Bach

This are my sketchnotes from DEWT4. The central theme of the fourth DEWT peer conference was “Teaching Software Testing”. 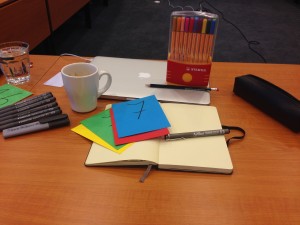 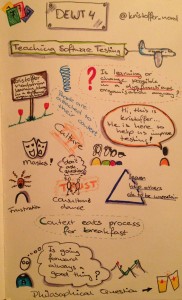 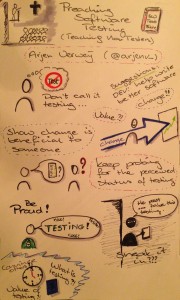 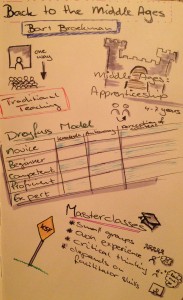 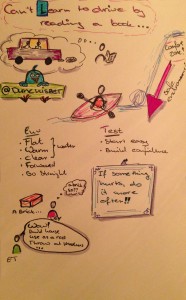 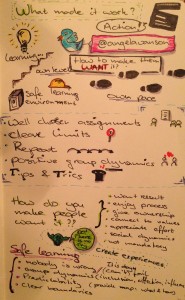 So you think you can test ….

Recently I saw this tweet: “a lot of testers don’t consider alternatives because they don’t know them”. It was a reaction in a discussion about a Dutch article with the title „The days of the ‘Dutch school of testing’ are over”. Jan Jaap claims that Dutch testers suffer from “Law of the handicap of a head start“. Really? I don’t think it is the handicap of a head start. Did we (Dutch testers) ever had a head start? I think it is something that is called “The Dunning-Kruger effect“. 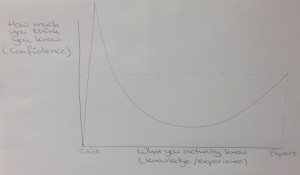 The Dunning-Kruger effect, named after David Dunning and Justin Kruger of Cornell University, occurs when incompetent people not only perform a task poorly or incompetently, but lack the competence to realize their own incompetence at a task and thus consider themselves much more competent than everyone else. Put more crudely, they’re too stupid to realize they’re stupid. The inverse also applies: competent people tend to underestimate their ability compared to others. (Source: Rational Wiki)

In the words of Dunning and Kruger: this overestimation occurs, in part, because people who are unskilled in these domains suffer a dual burden: Not only do these people reach erroneous conclusions and make unfortunate choices, but their incompetence robs them of the metacognitive ability to realize it.

I think many testers don’t realize that they actually know very little about testing at all. And that is why they don’t do anything to get better. They are also not encouraged much by their colleagues. Testing is often underestimated. I guess everyone has examples of managers who do not value testing as much as we would want them to. Testing is often devalued as “pushing buttons” and “everybody can test” is believed by many. I have seen companies who use testing as education, a first step in an IT career…

But there is more… I have worked as a selling and hiring manager and I experienced that there is a lack of competence in spotting talented testers. If you have the right certificates, people believe that you are a good tester. Because they simply do not know how to spot an excellent tester. In my recent job search nobody asked me to SHOW them my testing skills. We only talked about it.