This blog post was originally written as an column for www.testnewsonline.com (English) and www.testnieuws.nl (Dutch).

Did you have a chance to see the webinar “Thinking Visually in Software Testing” by Alan Richardson at the EuroStar Virtual Conference May 16th last? If not I suggest you do that now before you read this column. Also very interesting is the great blog post Fiona Charles has written about this topic with the beautiful title “Breaking the Tyranny of Form”. 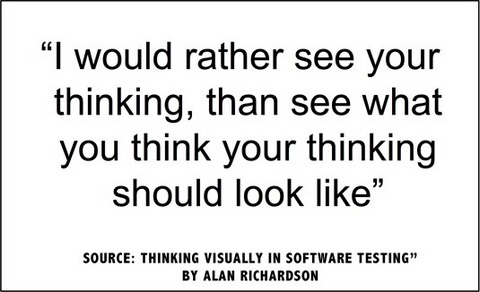 Fiona is annoyed by documents where the form is more important than the content. These documents are driving and constraining our work. She explains that templates limit thinking and creativity. In her article she shows some examples of visual representations that helped her in her work. 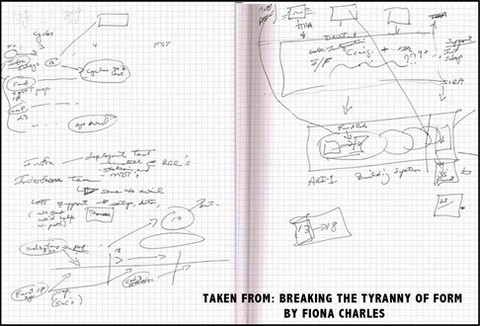 Text is boring and not very creative. It lets your brain run at half power, only the left part of the brain is put to work. Using images will also put the right part of your brain to work. People remember images easier. In addition, images often impress us more. A text normally needs many pages to describe what a single picture can say. The saying “a picture is worth a thousand words” is really true! A single image can transfer a complex idea fast and easy. Visualization allows us to quickly absorb large amounts of information. 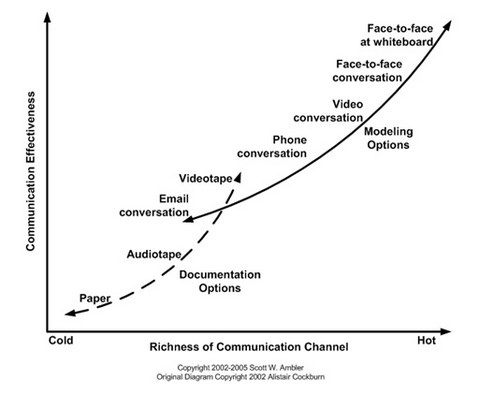 This picture makes clear that communication is enriched with visualization. For who ever bought a new house, you know: graphics were the deciding factor. The plans and artist impressions gave, before only one stone was built, an impression of how the future house was going to look like. The visualization of the house to be built, informed your decision. Could text do the same?

But why do testers still produce so much text in their work? The creation of “traditional” test plans, test reports and test cases is very time consuming. And I think they do not add a lot of value. Have you ever wondered how many people actually read your test plans arising from the use of a 21-page template? And if somebody would have read it, how much useful information is in there for the reader? And what will he ultimately remember?

Nowadays mind maps are very popular. I use them almost daily for various purposes: insight into situations, problem solving, summarizing, making records, creating plans, develop ideas or report status. I even created a mind map of my resume. The possibilities of mind maps are endless. The theory behind mind maps is fairly simple and making them stimulates the creative side of our brains through visualization.

On the back of a napkin

The drawing of (simple) images can be of great value. In my search for literature on creativity and visualization a few weeks ago, I walked into a book by Dan Roam called “The back of a napkin, Solving Problems and Selling Ideas with Pictures“. In this book Dan Roam describes how a simple drawing can help. I’m not a great artist and the simple drawings in this book appealed to me immediately. Ultimately it just requires drawing of simple shapes: lines, rectangles, smiles and stick figures. 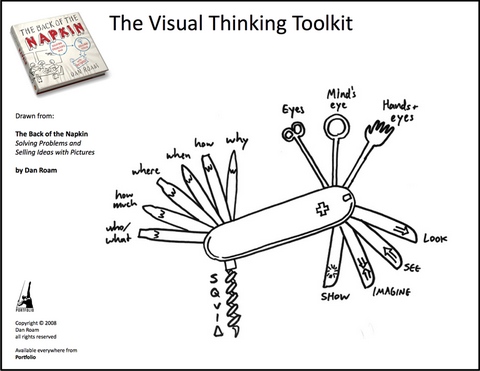 His philosophy is that every problem can be solved with a simple drawing. In his book he introduces four steps of visual thinking, five questions that help focus and six ways of seeing. Try it and see if it helps you.

I hope these examples inspired you to try to use more visualization. Try writing a test plan with a mind map or visualize your test strategy and scope with images. Why not put your thoughts on paper using a few sketches? Don’t let the thought that you can’t draw stop you. The creative process is much more important than the final result. Furthermore, you will see that it isn’t really that bad!

Awesome examples
Finally, I want to share some great examples of visualizations, two beautiful animations. The first is Steven Johnson – Where Good Ideas Come From:

And the second is Dan Pink – Drive. The surprising truth about what motivates us:

This Dutch example by Avans Hogeschool also shows how powerful visualization can be:

Gojko Adzic uses simple but very powerful pictures in his presentations that help me understand and remember his message easy.

The last example I like to share is a blog post about visualizing strategy, concept and design which shows some good examples of visualizations and has a few interesting links at the end. Good luck!

Last Friday (October 5th) a bunch of software testing nerds and one agile girl gathered in Hotel Bergse Bossen in Driebergen talk about software testing with the central theme “experience reports: implementing context-driven testing”. Ruud published almost all the photos I took on the DEWT website, so I have to write a report in text here. Thanks dude 😉 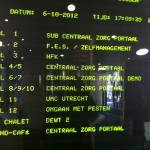 After some drinks and having dinner we gathered in the conference room called the chalet. I think they call it the chalet because of the humid smell inside because it certainly didn’t look like a chalet. 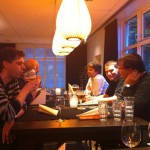 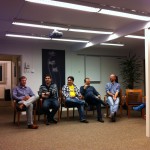 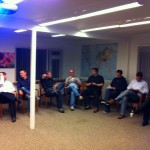 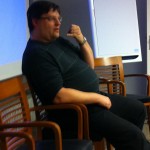 Joris had a short and clear answer to the first question: “yes!” (the context-driven community is elitist). We had a long discussion that went everywhere but never close to an answer to question about effectiveness and how it can be done better. Never the less it was a valuable and fun discussion. I will blog about this later this year.

We had a great evening/night with home brew beer “Witte Veer”, Belgium beer brought by Zeger and a bottle of Laphroaig quarter cask brought by Joris. Sitting at the fire place a lot of us stayed up until late… 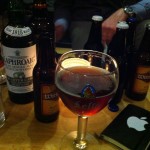 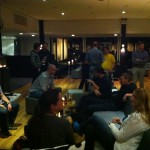 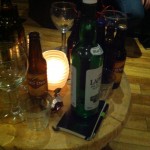 Peter was our facilitator and for the first time we used k-cards at DEWT to facilitate the discussion. I really like this method, but Lillian didn’t. She had an interesting discussion on twitter with some DEWTs. 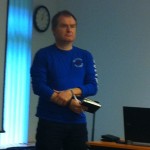 Jean-Paul: I like the LAWST format we are using for #DEWT2
Lilian: @Arborosa i don’t. impersonal and inhibits useful discussion
Markus: @llillian @Arborosa What’s the improvement you’re suggesting? 🙂
Lilian: @mgaertne @Arborosa but i am invited and feel i at least have to try it this way
Jean-Paul: @llillian @mgaertne Invite us to an agile event to learn alternatives
Markus: @Arborosa @llillian Funny thing, I would like to introduce more focused-facilitated sessions quite often in agile discussions using k-cards.
Lilian: @mgaertne @Arborosa different ppl prefer different things 🙂

Ilari kicked of with a presentation about the introduction of context-driven testing at eBay. He had two very interesting ideas: the first is “Monday Morning Suggestion” a short email to his team with tips, tricks or interesting links. The second was that he supports his team in getting better and learning by paying for their books and conference visits. Great stuff! 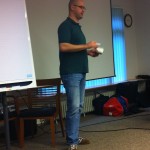 Second was Markus Gärtner with a story about him coaching a colleague to become a better tester and more context-driven. He talked about his lessons learned coaching where teaching gradually turned into coaching. He also gave some insight in the transpection sessions he did using the socratic method. 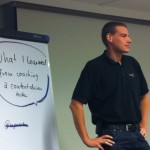 The third presentation was about changing people to become more context-driven by Ray Oei. An interesting discussion developed about how to get people to change. We focus too much on the people who do not want to change instead of working with the people who do want to change. Pascal asked an interesting question which I put on twitter: “If all testers become context-driven overnight, are we happy?” James Bach replied: “Yes, we are happy if all testers become CDT” and “We are happy if all testers take seriously the world around them, and how it works, and dump authoritarianism”. To me it doesn’t really matters, I do hope that more people become CDT, but I prefer good software testing no matter how them call it. 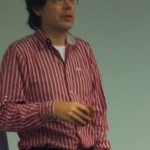 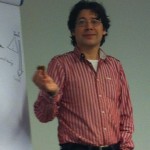 After the discussion Joris said he was attending the wrong peer conference since he expected a lot of discussion about testing instead of what he calls “people management”. An interesting question, but isn’t testing also a lot about people? Just an hour late we went for lunch and a walk in a wet forest. After the walk the group photo was taken. 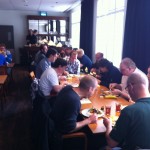 The forth talk was by Ruud Cox who talked about testing in a medical environment. He described the way he has been working. He and his colleague tester use exploratory testing to learn and explore. Scripted testing was used to do the checking. Ruud explained that exploratory testing fits very well in an R&D environment. After his talk we had an interesting discussion about auditors and their role in testing. 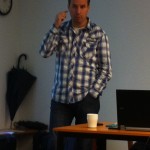 Around 16:00 it was my turn to do my talk about implementing context-driven testing within Rabobank. I did a short version of the talk I will do at EuroStar in November telling about the challenges we had and what we did to change our context. What did we do? What worked and what didn’t? Some interesting questions were asked. And we had a nice discussion about the personal side of becoming more context-driven where Joep explained how he became context-driven. The first stage was being interested and he went looking for a book. The second stage took him over a year where he struggled with the stuff he learned at RST and trying to adapt his way of working. The third and last stage is where he doesn’t need anything anymore because he will always find a way to make things work. 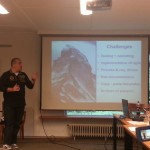 After my talk and the discussion the day ended. We did a quick round to discuss our experiences and thanked the people for attending, organizing and facilitating. Our agile girl still doesn’t know what to think about the facilitation with the k-cards, she obviously had to get used to discussing with the cards. I am curious how she thinks about them when she had the chance to think about it some more. 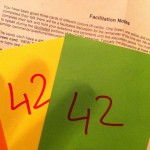 All together I had a great time. Pity we didn’t play the Kanban game on Friday. But I hope Derk-Jan will give me another chance at the game night at TestNet in November. Thanks all for the awesome weekend!!

DEWT3 is already being planned for April 20 and 21 next year and James Bach will attend. Let me know if you are interested in joining us in April 2013. The topic hasn’t been decided yet, but if you have great ideas please share them. 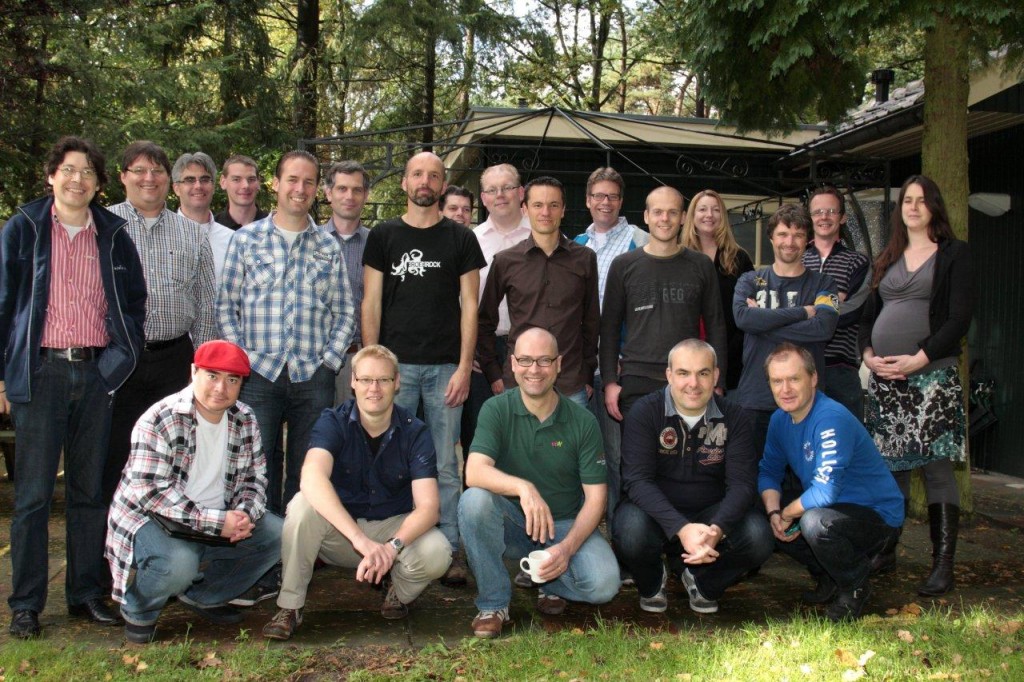